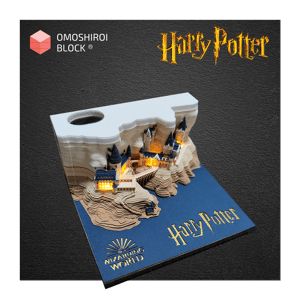 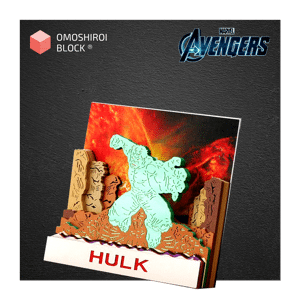 Harry Potter fans know that Hogwarts Castle always appears like a ruined building in the eyes of muggle people. And whether you are a Muggle or a Witch, we can now see this magnificent castle with the Omoshiroi Block memo pad. As each page was torn off and used, Hogwarts Castle would gradually appear along the back of the stack. When all the pages are out, a replica of the witch’s school is fully exposed, ready for you to display on a table or shelf.

The castle’s gardens were very large, including a vast lake, a dense forest, several tree-lined greenhouses, watchtowers, and a Quidditch courtyard.

In Hogwarts, a history explains how the school was also concealed from the Muggle people by disguising itself as a dilapidated house (danger! Avoid getting close …) and enchanted with the impossibility to project ( cannot be drawn on the map). Everything Muggle’s electronic and high-tech items are ineffective here.

In the Harry Potter series, there are 4 houses in the Hogwarts School Godric Gryffindor, Salazar Slytherin, Rowena Ravenclaw, and Helga Hufflepuff. Each family has its own Quidditch team – also competes against each other for the Quidditch Cup. These two rivalries gave rise to a rivalry among the houses, especially between the Gryffindors and the Slytherins — the two houses throughout the series. Students both live and study in Hogwarts. Each year, several groups from each home share dormitories and classrooms. In real life, there are many schools in English speaking countries also use this system. Like many other topics at Hogwarts, author J. K. Rowling applied true boarding schools to bring life to the world of Harry Potter. House rivalries, separate hostels, and the scoring system are all about the real world.

From the delight of the novel to the beauty and grandeur of Hogwarts to satisfying fans’ love for the Harry Potter series, we’ve researched and figured out how to bring the castle. This comes to you through the Omoshiroi Block. Hogwarts Castle Omoshiroi Block is a tiny 8 x 8 x 3,5 cm memory pad that can be placed anywhere on your desk without affecting the surrounding space, and at the same time Pen holder for office workers. After each use, the paper on the Omoshiroi Block fades away, instead, a castle magically appears. You will enjoy the feeling of waiting and extremely satisfied when the work is completed. Although the value of this Memo Pad is not too cheap, you will not regret every penny you spend.

There are no reviews yet.